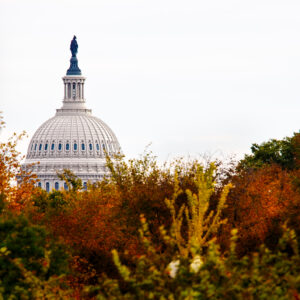 We’re less than a month away from one of the most hotly anticipated and consequential elections in our nation’s history. And despite recent polling, the outcome and reverberations are still anyone’s guess. To help us ‘game-out’ possible election outcome scenarios and examine what they would mean for the overall policy agenda, SIIA hosted a virtual discussion on October 6th with Steve Haro and Dean Hingson, two Capitol Hill veterans and Principals at one of DC’s top government relations and strategic consulting firms, Mehlman, Castagnetti, Rosen & Thomas.  Although politically Haro and Hingson sit on opposite sides of the aisle, they were able to find some points of agreement, and both had plenty of thoughts on potential outcomes for the months ahead.

Haro forecast a 291 electoral vote win for Joe Biden and a 50-50 split Senate result.  Hingson emphasized that President Trump was very much still in the running and agreed on the probability of a 50-50 Senate.  In Hingson’s view, the biggest risk in this election is the validity of the vote (i.e. whether Americans will see the result as valid). He pointed to two cases out of the Pennsylvania Supreme Court as examples – one that set a high standard of technical compliance for mail-in ballots, and another that allows ballots received up to three days post-election to be counted. With these rulings, one could envision a high level of rejected ballots and extended counting delays which could call the validity of results into question.  Both did however, agree that voter turnout will likely be historically high – up to 150 million ballots cast, compared to 128 million in 2016.

One point of agreement was regarding the stimulus, with both agreeing the prospect of a fourth relief package before the election was low, despite reportedly promising talks between Treasury Secretary Mnuchin and Speaker Pelosi.  In fact, shortly after the event President Trump instructed Secretary Mnuchin to discontinue discussions with the Speaker.

With respect to tech policy, both Haro and Hingson predicted more similarities than differences between Biden and Trump.  Either administration would be likely to increase antitrust enforcement in the sector.  With regards to the liability shield under Section 230 of the Communications Decency Act (CDA), in their view it not a question of whether this will be amended but rather how and when.

Hingson anticipated that should Trump win, policy on the pandemic and the economy would likely not change much.  While Haro expects that a Biden victory would lead to a greater emphasis on solving the pandemic including a heightened interest in addressing social issues.

The conversation between Haro and Hingson was lively and cordial (if daunting at times) and members are encouraged to watch the video recording linked below.  The bottom line is that many outcomes are possible, including several that would lead to a 269 to 269 electoral college split and/or a 50-50 Senate.  The only thing that anyone can say with any certainty is that the next several months will be interesting.